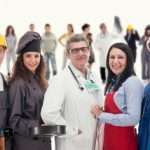 Division of Labor refers to the idea that when each person in a group specializes in a different set of skills the effectiveness of the group will be higher than if everyone tried to be self-sufficient and do a little bit of everything themselves.

Because each person has the time to master a few skills, they can trade the results of those skills with people who have mastered other skills and everyone will benefit.

The key idea is that specialization tends to increase the productivity of a group.

Case 1: Most new companies start with just a few people, and everyone wears multiple hats to get the job done. However, as the company grows, more and more people need to be hired to handle the additional work. Over time a hierarchy typically forms and various silos of responsibility are created.

For example, when the new company ABC Corp was first created, Rachel did all the programming but she also used to handle the internal network and fixing peoples’ computers. Now she is the director of the development team and a whole new IT team has been created to handle all the employee computers.

Case 2: Now ABC Corp has tripled in size and they need a new building. So instead of sending everyone to a construction site and hoping they can create a new building from scratch, they hire a construction company to build a new headquarters for them. This lets ABC Corp focus on their core strengths while knowing their new building will be built to code (and a heck of a lot faster than they could do it themselves).

Case 3: After moving to the new building, ABC Corp has grown so much they want to start doing business internationally. They start creating entire divisions that operate in other countries that rely on the diverse local resources and people to create new products that wouldn’t have been possible in their home country.

Division of Labor is important for many different reasons.

First and foremost, specialization is directly tied to the human ability to Trade. It is our willingness to exchange one set of goods for a completely different set, such that both parties benefit, that allows us to specialize in the first place. If we couldn’t trade unlike for unlike then we would be back to everyone being self-sufficient and doing and making everything we needed ourselves. True self-sufficiency doesn’t leave much time for invention or perfection.

Similarly, as different people master different skills we develop a sort of Collective Intelligence that makes a whole which is greater than the sum of the parts. Together we can make things much bigger than ourselves.

We also see how it plays out in organizations of various sizes as shown in the case of ABC Corp above. As a company grows there must be a Division of Labor that takes place over time: no single person can know and do everything required to make a company the size of Disney operate. Indeed, sometimes it can be a good thing to create and encourage specialization within a company as a means of spurring innovation and growth.

Think about the skills you have, especially the ones you use to trade for other things you need.

Typically we work at a job and receive money as payment, but it’s still a method of trade where we share our skills with the group and in return receive something valuable that we can exchange for things we need but can’t create ourselves.

What things have you traded for recently?