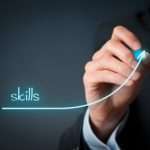 A Skill Stack refers to the idea that having a wide range of complementary skills generates a multiplier effect towards success.

This is an idea I learned from Scott Adams, who calls it a Talent Stack (I prefer Skill Stack simply because, to me, Talent implies an innate ability while Skill implies something learned through hard work).

So, for each new skill you acquire, it combines with your existing skills to make you that much more marketable and/or able to create something new that people would be interested in.

It’s worth noting that, while similar, I believe that Mental Models and Skills are different things. Mental Models are filters on reality, helping you understand the truth behind what is occurring and why, while Skills are productive abilities you have acquired that you can use to perform acts to accomplish goals.

The key idea is that additional skills provide you with value exponentially (non-linearly), in an intentional Jack-of-all-Trades kind of way.

Padding your Skill Stack is a great way to make it more likely that good fortune will find you.

Case 1: Imagine two similar software programmers that work on the same team, Abe and Bob. They are both equally good at programming, but Bob has also mastered business writing. Which one is more likely to progress in their career? I imagine the one that can write clearly will more likely make their customers (and boss) happy.

Case 2: Now imagine the same two programmers, but Bob is less proficient than Abe at programming. Which one will likely progress? Here it’s not as clear, but I would argue that Bob would probably still be more successful (provided his software was passable and not just plain awful).

Case 3: For fun, let’s assume Bob is a poor programmer. However, in addition to business writing he is also skilled in persuasion, prioritization, planning, and budgets. I think we all know he’s on the management fast track!

The idea of a Skill Stack is complementary to other Mental Models in many ways.

As you acquire other skills you are likely to pick up on new Mental Models along the way. When Bob the programmer studies marketing he’s going to pick up on some business-based Mental Models he might not have come across otherwise, such as Scarcity and Social Proof.

Also, you can use Mental Models to make your skills stronger. The programmer that understands Constraints and Redundancy will be able to make faster, more resilient software systems.

Take a step back and assess your current set of skills, and where you are in relation to your goals.

Now, what can you do to improve your skills in order to better reach your goals?

One option would be to work on your existing skills so they are stronger, but the Skill Stack model implies you may be better off adding more skills instead of perfecting your existing ones.

Remember, new skills are multipliers, especially when you can apply them together in new ways!